when a home dreams green it dreams strawBale

Sustainable living for a Sustainable future, for when a home dreams green it dreams strawbale.
THE VISION:
From the beginning it was our intention to build ecologically friendly, structurally sound, naturally efficient homes, using a minimum amount of embodied energy. These methods resulted in a home that is comfortable, artistic, and modern while minimizing the monthly and ever increasing utility bill. To that end I believe we succeeded.
After a decade and 8 homes, my goal now, is to promote the continuance of the strawbale paradigm. I wish to use this blog as a vehicle to perpetuate the ideals that we can reduce our 'footprint’. That we do have options that don’t include following the path of oil. That sometimes the best solutions are the simplest ones.
In the end, the big bad wolf, he huffed and he puffed and he huffed and he puffed and.........The 3 little pigies sat comfortably in their home of straw, completely unaware of the danger out there. The wolf contemplated, totally in awe. Perhaps it weren’t so bad to have a home made of straw.
©gregory vroom walter 11/29/11
I believe that the most comfortable home I have ever been in is a Strawbale home.
It is not my intention to teach everything there is to know about strawbale, for there are plenty of books already written that do this quite well, of which I will recommend. Rather my intention is to share the knowledge I have gained from designing and building eight homes that have all performed beyond expectation. I hope you find my posts and pages informative, enjoyable and helpful.

Ok, Back to the business of building a tyre and strawbale hybrid.

Ok, Back to the business of building a tyre and strawbale hybrid.

Remember; when a home dreams green it dreams strawbale. 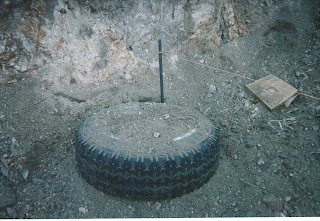 Micheal Renalds  books Earthship’s 1&2 Had a huge influence on me and in my opinion a must read for anyone interested in sustainability, green and natural building etc… His concepts are sound and harmonize well with the permaculture ethos.


Personally I chose to build a hybrid using Earthship concepts below grade and strawbale above grade. I chose this option for a couple of reasons. One, packing tyres is a hell of a lot of work, and one only needs so much mass for an efficient passive solar home.


I have since built 3 homes using tyres to get above grade. They work great when berming into the earth and honestly are not that bad to pack from the ground to about chest high. After that they get incrementally more labor intensive.


I think tyres make excellent Foundations and stem walls. Unlike concrete which is brittle and therefore inflexible, tyres can move with the earth but because of their width still remain stable. And we all know that the ground is in a constant state of flux.
When collecting tyres it is important to get all the same size. In my case they were R-75-15. You will want to learn what the most common SUV or truck tire is in your area, as they will be the easiest to collect. My county is rural with about 14000 souls and supports 3 tire stores. With that said I was able to collect 300 tires in about 3 weeks. Keep in mind these were all the same size tires. That puts into perspective how many tires we use and exemplifies the importance of finding ways to use this soon to become precious resource, and they make great foundations.
When prepping the ground to use Tyres or REU’s [ rammed earth units ] the same rules apply as to any other footer/foundation. The grade needs to be level and on “undisturbed soil” or packed to 50 psi per engineering specs.
This is usually done with moistening the dirt and tamping with a mechanical tamping device. 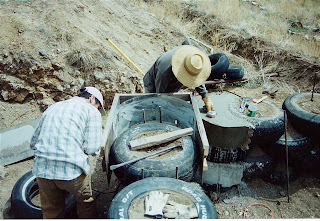 My approach to packing tires is to use two people working as a team with one person on opposite sides of the wall. One person shovels and packs while the other pry’s open the rim of the REU with a pick axe. The shoveler first fills the tire and then packs out the inside of the tyre first by hand and then with a small 2 pound sledge hammer. This will fill the tire to nearly the required amount with the least amount of effort.
Note: when the REU [R-75-15] is packed to 10” you have achieved the proper psi per engineering specs of 50 psi. [I have the specs on this and would be happy to share them]. It is also important that you keep each course on the same level. Sooo---always shoot grade and use string lines. We will be discussing more on this as we go.

Using between 3 & 400 tyres in a project would take a crew of 6 people about a week to complete. The cost compared to what the same amount of mass in concrete would cost me with labor included.
One reason why REU’s work so well is that the rubber acts both as an insulator but also as a conductor. So as one tyre heats and becomes warmer than the tyres around it the rubber helps to conduct the heat to the surrounding cooler tyre.

No workshops are planned at this time. If you are interested in Hosting and Organizing a workshop and you would like me to provide instruction you may contact me at: greg@wanderlustroad.com

More of what we do and what were about

t and g Vroom
Salida, Colorado, United States
Terri and I are upstream swimmers. after all; the only fish goin down stream are dead. We own a womens consignment boutique, we lived off the grid but no more, we Built Strawbale homes 8 of them, Make Soap, Play music, and try oh so hard to walk gently on this earth. Live, love, laugh, and cry with intention. Be strong for friends and family and be weak with each other. Live for today with tomorrow in mind, Face our fears, and run like hell if it,s bigger than we are.