when a home dreams green it dreams strawBale

Sustainable living for a Sustainable future, for when a home dreams green it dreams strawbale.
THE VISION:
From the beginning it was our intention to build ecologically friendly, structurally sound, naturally efficient homes, using a minimum amount of embodied energy. These methods resulted in a home that is comfortable, artistic, and modern while minimizing the monthly and ever increasing utility bill. To that end I believe we succeeded.
After a decade and 8 homes, my goal now, is to promote the continuance of the strawbale paradigm. I wish to use this blog as a vehicle to perpetuate the ideals that we can reduce our 'footprint’. That we do have options that don’t include following the path of oil. That sometimes the best solutions are the simplest ones.
In the end, the big bad wolf, he huffed and he puffed and he huffed and he puffed and.........The 3 little pigies sat comfortably in their home of straw, completely unaware of the danger out there. The wolf contemplated, totally in awe. Perhaps it weren’t so bad to have a home made of straw.
©gregory vroom walter 11/29/11
I believe that the most comfortable home I have ever been in is a Strawbale home.
It is not my intention to teach everything there is to know about strawbale, for there are plenty of books already written that do this quite well, of which I will recommend. Rather my intention is to share the knowledge I have gained from designing and building eight homes that have all performed beyond expectation. I hope you find my posts and pages informative, enjoyable and helpful.

I bought the land May 4th , 1994 but this venture didn’t begin then. No sir. For me it began two years earlier, if not from the time I was born.


Like the sayin goes; how long did it take you to do this? My whole life, or 51 years as of this writing. Some things we were destined to do whether we know it or not. I always wanted to live off the land “sustainably” so to speak so I started out back in 92 or so looking for land from New Mexico to Idaho. This is the first place I saw. Nothing else compared, Seriously. I saw the potential but had no understanding of the can o’ worms I was openin, ahh, through the lens of youth and idealism. Oh well. Never afraid of learnin something new, nothing left to do but point em down hill and let er rip. Pick your line and shred it so to speak. Well here we go-----19 years later! Talk about shreddin some vert. 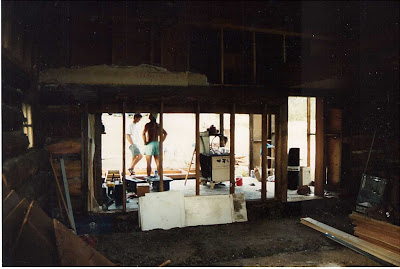 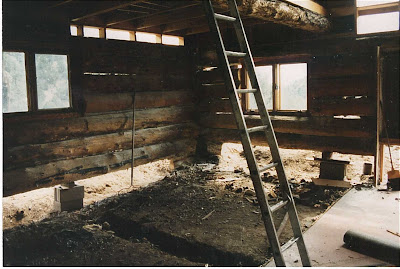 After pullin out the unfinished dry wall and insulation in the gable's and ceiling, then cleaning out the hardened rodent piss and skat [this was 1994 the year of hantavirus] 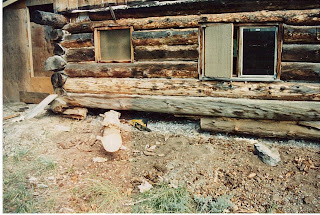 it became obvious that in order to prevent rodent infiltration we needed to pour a floor. also, the bottom course of logs as they were on the ground were rotten. had to go. we hand dug a footer/foundation and poured a mono-slab concrete floor. that was my first attempt at flat work. one of the cement truck drivers froze up on our road and then got stuck. we didn't finish the pour until midnight in what was the first snow of fall. 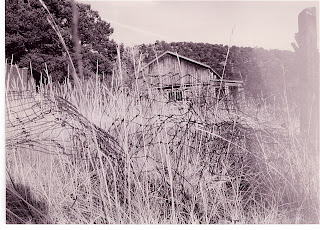 This place was run down, I mean seriously run down. The cabin, an old miners cabin from 1880’s was, for lack of a better description, a wildlife refuge with every known animal in the region either livin, huntin, and defecating in there. That’s how porous the place was. And so it began, the openin of the can.-------enjoy the worms.


As I said before the cabin was a wildlife refuge. To emphasize; soon after I had bought the place a buddy and I had been white water rafting on the Arkansas that spring day in May and it had been very wet! On our way back to the cabin it had rained enough that on one of the many steep hills leading to the place we were not able to get up because the road had simply got to greasy and we did not have 4 wheel drive-----yet. So we packed up our sleeping gear, food, etc.. and walked the last mile up to the place in the rain. Now normally we would have slept outside because the cabin really stank at the time, later we would find out why, but on this eve it was simply too wet to sleep outside as we did not have a tent. Later, once we were sound asleep there was a creature running over us in our sleeping bags and my buddy Mike, in frustration as we were very tired from the day’s activities, grabbed his shoe and started smacking around with it in hopes of hitting whatever creature was buggin us. At that moment I urged mike to stop till I could grab a flashlight to see what it was. I did, and what I saw in the dim light was a family of skunks! They must have been living under what was the wood floor at the time. Anyhoo, somehow I was able to coax the skunks out the back door. How we avoided not getting sprayed is beyond me but it was a very lucky day indeed. 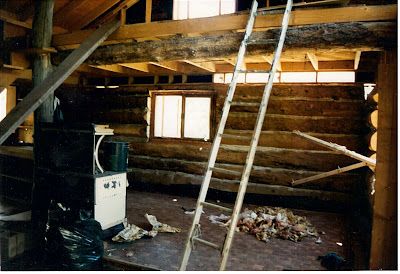 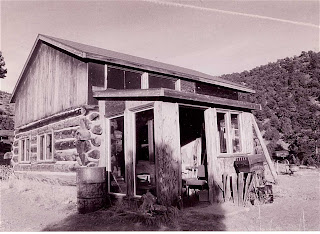 As you can see in this photo, though not as well as I’d like, that the chinking like everything else was in bad shape or non-existent and In fact had not been done since 1907. We know this because newspapers were used to fill in the gaps between the logs and were from Portland Maine dated 1907. When re-chinking I had found a recipe in the Complete Book Of Cordwood Masonry House building: The Earthwood Method by Rob Roy (Jun 30, 1992) .The recipe consisted of a typical masonry mix of sand, lime, Portland cement, but with the added ingredient of sawdust soaked in water and added to the mix. The mix was just right when you could make a snowball, throw it in the air, and upon landing only slumped a little bit but still held together. The sawdust helped with elasticity, and slowed the drying which improved the curing. After 19 years it is still holding strong! I would recommend this recipe! 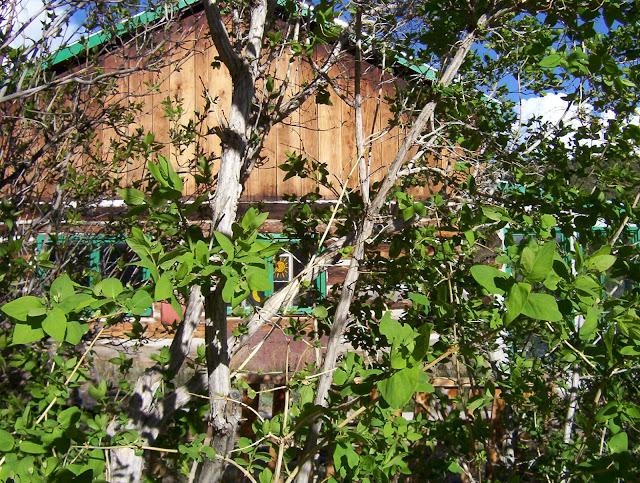 The Rock Wall you see here is of native stone and was built by my friend Mike “the skunk slayer” whom was a rock mason in Breckenridge before becoming head of Summit Huts. This is a free standing wall that separates the living room from the bedroom, is 18” thick, has shelves, crystals, antlers for coat racks built into the masonry. The main purpose of the wall was to act as a heat sink absorbing heat from the ambient temperature of the cabin, as well as to absorb heat from the wood stove. Though not a tromb wall it performs perfectly. Although like all mass, especially uninsulated it swings both ways. Ie.. it helps keep the place warm when the place is kept warm but also takes a while to heat up if it hasn’t been kept up, with warmth that is.


The rock used in this wall as well as our stem wall to substitute the bottom course of logs was selected for its near perfect brick  shapes. In other words all the surfaces were flat and fairly square or rectangle.
The interior of the cabin has earth plaster details where conventional building materials meet natural ones. The dry wall is painted with Bioshield Matt white natural paint {for both primer and finish paint} and then pigmented with Concrete mineral pigments. {A much cheaper alternative to buying pigment from bio-shield} I purchase these pigments from any concrete batch plant, or from Blue Concrete. I choose this paint because it is truly odorless and economical.
Though the historic cabin part of the Way Back Inn is far from a well built passive solar home it functions perfectly well. What would I have done differently? Without changing the historical nature and feel of the cabin I would have insulated under the concrete slab as heat goes to cold and the earth will forever drink whatever heat you feed it. In the future I may consider  plastering the exterior logs with adobe and a lime top coat to better insulate the logs and seal air infiltration between them. Then the logs would act more as an heat sink and less as a conductor of heat. 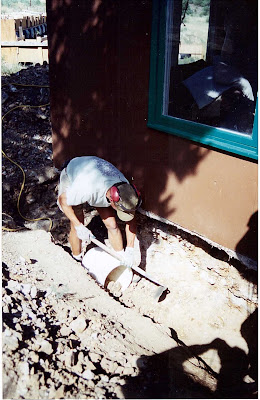 At some point we had to pull a permit for the rehab we were doing to the cabin. The cabin actually sits on a rock outcropping and although the walls of the bedroom were on a concrete slab by the previous owner I still needed to put a foundation under it. So here is my friend Kevin helping me hand dig for the foundation 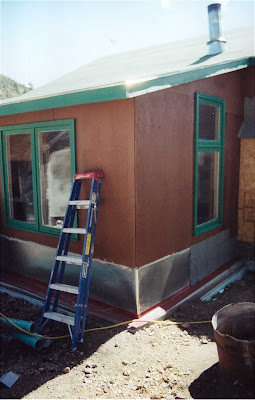 Because of the elevation in relationship to the addition I would have a drainage problem. To remedy this I flashed with metal the first 24" of the bedroom walls.

Note the evidence of 2" blue board at the foundation level and the over lapping flashing for drainage and water protection. 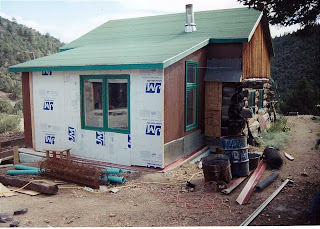 After flashing, I then insulated the exterior with 2" rigid. The walls were built of two by fours, consequently it could only be insulated to R13 with fiberglass. by adding the rigid on the outside I now achieved a R value of 23 with no thermal breaks. 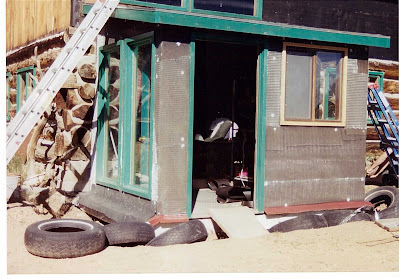 Note the drainage pipe in the above photo. That would be used to drain water underneath the breeze way that is not yet built. 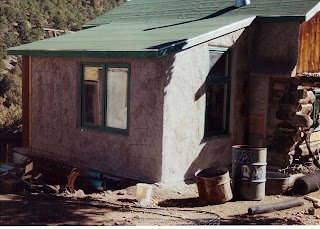 A rough coat of cement stucko was added as a primary top coat.
This is before I had learned about Natural Plasters.
Posted by t and g Vroom at 2:21 PM

No workshops are planned at this time. If you are interested in Hosting and Organizing a workshop and you would like me to provide instruction you may contact me at: greg@wanderlustroad.com

More of what we do and what were about

t and g Vroom
Salida, Colorado, United States
Terri and I are upstream swimmers. after all; the only fish goin down stream are dead. We own a womens consignment boutique, we lived off the grid but no more, we Built Strawbale homes 8 of them, Make Soap, Play music, and try oh so hard to walk gently on this earth. Live, love, laugh, and cry with intention. Be strong for friends and family and be weak with each other. Live for today with tomorrow in mind, Face our fears, and run like hell if it,s bigger than we are.